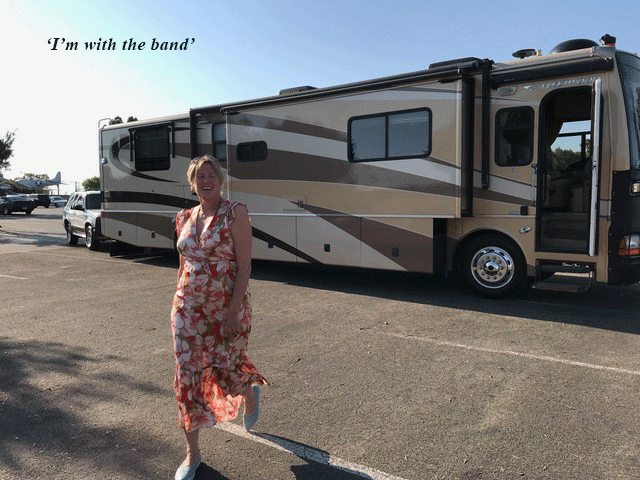 Are you desperate to get away from the washing up and travel the world by public transport? I am. But these days the closest I get to the joy of foreign travel is discovering Raz-El-Hanout in our local Sainsburys.

The last proper holiday we had was in 2018 when we drove round California in an R.V the size of Aerosmith’s tour bus. Not my choice, but a holiday on wheels was the only option husband Jonji would consider. That. Or a tent. Which was out of the question for someone who aspires to living alone in the penthouse suite of Claridge’s.

Back then we were as disparate as a family can be. Secreting ourselves away each night to commune with our iPhones, whilst once beloved board games gathered dust in the cupboard. We didn’t even watch Netflix together because none us could agree on what to watch. And it was making me sad so I decided to come up with something big and bold. Like 4 weeks round California in a R.V. with no iPhones. That’d work right?

Our first stop was the family room of The Seashore Motel in trendy Santa Monica where the kids quickly tired of my all-together-now bonhomie. “Mum! Can you stop being so chipper!” said Lucas, poring over a magazine ad for Ultimate Ankle Holster which offered ‘a swift, silent draw for your main or back up weapon.’ “Do you think I’ll get shot?” shouted Lola from the bathroom.
“Probably” muttered Jonji who’d been waiting 25 minutes for a pee.

After a gargantuan ‘surf n turf’ lunch we whizzed down Rodeo Drive in an open top Jeep on a shameless hunt for celebrities. We were rewarded with Snoop Dogg in his black Range Rover who stared straight through us at the traffic lights but he might as well have blessed us for the beatific grin on Lucas’s face. Later as we were boogie boarding in the rolling Pacific, the kids begged us not to leave L.A. “But what about our adventure?” I said. “Don’t you want to see the Tallest Tree in the World?”

The next day we collected our R.V. Or rather we didn’t. Because Outdoorzy, the ludicrously named rental company lost our booking. “But hey! No sweat! Look what’s comin’!” said Gary, the tiny man in charge. And there she was. A 45 foot ten ton behemoth of an R.V in swirly cream and cappuccino brown, steaming towards us like a pissed up maiden aunt at a wedding, “Ain’t she a peach?” said Gary. “Talk about an upgrade! Check out those pop-outs! See? The walls slide right out. And I’ll even throw in my Ford Explorer!” “Whaaaat?” said Jonji, ”You’re expecting us to tow a car as well?”

My heart sank as I looked around the R.V to find not one but four TV screens on display. “Jump in kids, we got everything you need – Wii, X box, Playstation, Fortnite.” Said Gary, leaping about like a demented Rumpelstiltskin. As the kids whooped with delight, Jonathon took him aside and whispered sternly in his ear. “Oh or we could disable” Gary responded. “That’s good too.”

As we drove away, Gary shouted after us. “And don’t bother with R.V parks! They’re snobby! And expensive! Use truck stops! They’re free of charge! Or better still, Walmart shopping lots! In a coach this size you’ll be treated like royalty.
Really?
“Ma’am!” said the parking manager of the first Walmart we got to “cant you read the sign? It says NO BOONDOCKING!” And the truck stops were equally hostile. “I’d turn that ugly rig right around little lady” said a grizzled old trucker with eyes the size of currants. “Truckers’ll slice off your pop outs. Or worse.”
No one’s getting their hands on my pop-outs I thought & we quickly drove away.

With night closing in we tried every trailer park in Ventura County but none of them had bays long enough to take us, so we just had to keep driving. “Call Gary NOW!” shouted an apoplectic Jonji, veering onto the pavement and scraping past a 20 foot sign that read ‘Jesus is King’. “Well” mused Gary “I guess you could try fairgrounds. Or casinos. And o’ course there’s railroad stations. Or airports!”
Goodbye Gary.

Hoping for a warmer welcome in Santa Barbara, we got stuck down a narrow street in a dodgy industrial estate with no way of turning or reversing, so we had to unhook the Ford and perform a million point turn. Night was falling and here we were, beached in a gas guzzling whale surrounded by men with tattooed faces making creepy eyes at our 15 year old daughter. I started to cry and so did Jonji whilst the kids stared mournfully out of the window, wondering what they’d done to deserve idiots for parents.

Finally, at Pismo beach we managed to squeeze between two monster R.V’s emblazoned with the words TRUMP IS KING, where I actually witnessed a teenage mother feed her baby Cheetos.

The next day’s drive along the coast of San Luis O Bispo with its herd of sleeping elephant seals, restored our faith in America. Jonji discovered a brilliant app called Harvest Hosts that allows R.V’s of all sizes to park in their farms so long as they purchase their produce, and we enjoyed three drunken nights in two wineries and a ciderie. But as we approached Monterey County, the Harvest Hosts disappeared, forcing us to park at the Monterey Fairground where voluminous Californians in rented Scottish garb lumbered towards something called The Monterey Celtic Explosion. Thrilled to be off the road at last, we ate In-N-Out burgers and watched Mary Queen of Scots alight from her R.V bearing a tin of Highland Toffee.

In arty but soulless Carmel-by-the-sea, we marveled at the jejune crap that passed for art, sold by gormless curators in epaulettes that reminded Lola of The Simpsons. After a heinously expensive bill for food that was more rumour than substance, we trudged the length of Carmel Beach where every second sunbather had been physical enhanced. “Fall of the Roman empire” Lucas announced and we all agreed.

In Santa Cruz we watched hump back whales frolic from the bow of a tourist boat. Lola was fascinated by a boy who spent the entire trip glued to his phone. “Wow. Bored by whales.” she said. “Not much hope for him is there mum?”
In San Francisco, we took the kids to the Haight-Ashbury neighbourhood to show them the birthplace of hippy culture but the place was full of strung out junkies shivering in doorways and the kids turned on us.

“WHY CANT YOU BE LIKE OTHER PARENTS AND SHOW US NORMAL STUFF? WE NEVER ASKED FOR THIS STUPID TRIP BUT YOU DRAG US HUNDREDS OF MILES TO LOOK AT PLASTIC PEOPLE AND DRUG ADDICTS. WHAT’S WRONG WITH YOU? 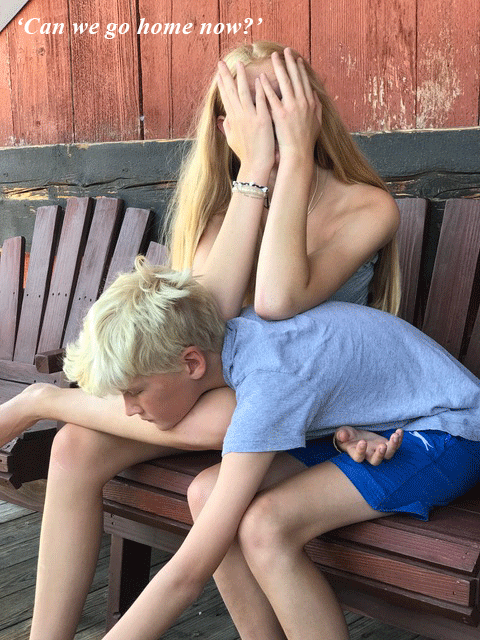 Back at the R.V the kids demanded access to the iPhones they had hitherto managed to forget. We stuck to our guns and an ugly scene ensued as they stormed out of the bus and ran down the highway shouting “FASCISTS!”

That night I dreamt I was expelled from the family and Jonji re-married the lovely floaty lady from the Timotei advert who the kids adored. I woke up sobbing and gave in, granting them their wretched phones for an hour. Then we watched them unravel like meth addicts so I took them away again.

The next day we drove in stony silence to the hippy town of Bolinas whilst Jonji and I got our fill of Redwoods & raptors and Lucas and Lola held up a sign to motorists from the back window that read ‘Please Help Us.’ Thankfully they lightened up a bit when we trekked to a beautiful lake whilst singing the whole of Bohemian Rhapsody from start to finish. And at bedtime they even thanked us for a lovely day and informed us that weren’t so bad after all.

Our trip to Yosemite was halted by the largest fires in the history of California so we decided to drive through Death Valley where the R.V thermometer hit 107 degrees just as the air conditioning spluttered to a halt. “That place looks cool!” said Lucas, pointing at a diner in Lone Pine that advertised All Natural Deep Fried Honey Glazed Bacon Flavoured Turkey Jerky. “Ya know ya wan’ it!” hollered a very old man in the tightest pair of shorts we had ever seen who turned out to be our waiter and gamely responded to Lucas’s rapid fire questioning on the minutiae of California gun law whilst we silently longed for Lucas to adopt another interest.

Finally we made it to Las Vegas. “This place is freaky.” said Lola “Why are we even here?” I looked at her incredulously. “What do you mean ‘why are we here?’ For the magic of David Copperfield of course!” And David Copperfield was indeed magical. He arrived on a Harley Davidson, conjured up a rose from thin air and made a Tyrannosaurus disappear before our very eyes. Even the kids, jaded by the black arts of TikTok, were captivated.

After the show, we swooned at the lights and the heights and the sheer balls of a country that can re-create Sodom & Gomorrah from sand. And on the last night of our trip – after four weeks of unfacilitated family therapy in a giant suppository on wheels, there was a moment, in front of Caesars Palace, as fireworks and fountains shot into the air, where the kids slipped their soft hands into ours, and, high as kites on magic, mojitos and Dr Pepper, we were a real family again, just like when they were little.