When I was 5, I was coaxed into a toy drawer by my big sister. As I lay there, blinking in the dark, I composed an operetta involving two blind orphans drowning in the Caspian sea who are rescued by a lovely Chinese princess wearing a nightie made of humming birds. This incarceration and other traumas inspired a life-long thirst for intensity. To date I have been a roller skating waitress, a dental nurse, a gangster’s moll, a ranting student journalist, a cage dancer, a stage actress (and brief muse to Germaine Greer), a yoga teacher, a wellness entrepreneur, a colon coach, a stand up and character comedian, a TV scriptwriter and for one surreal afternoon in a basement flat in Maida Vale, a dominatrix.

And now, for your delight, I am devoting myself to this weekly blog.
I hope you enjoy it. X 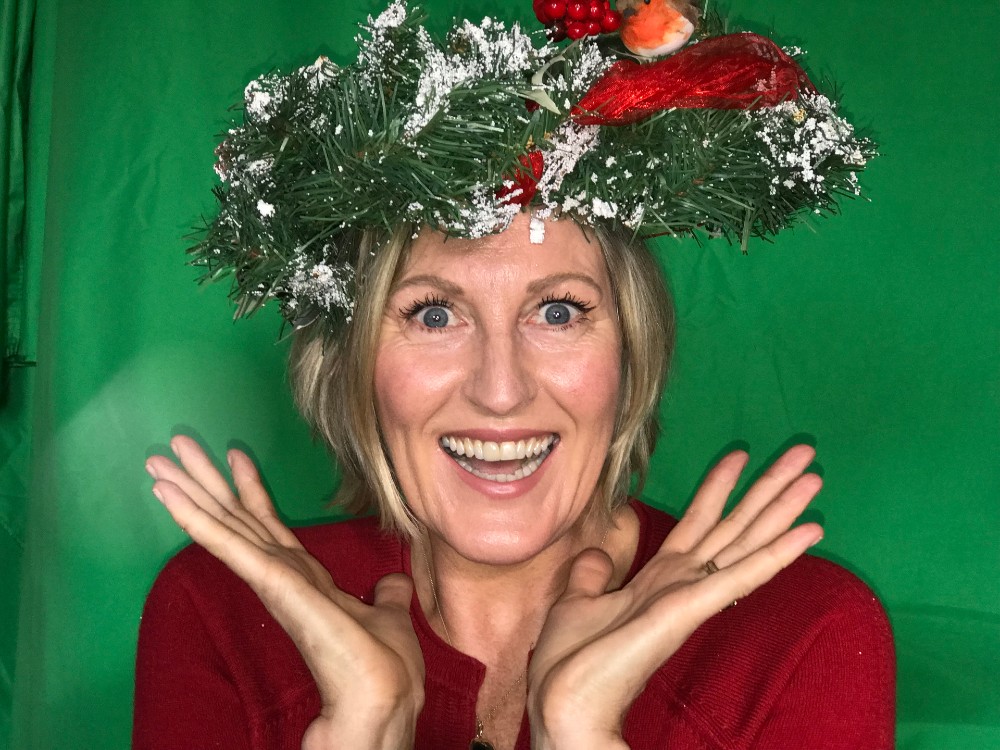 ”Put me in your microwave and I will keep you warm” promised the unicorn. That’s what had set them off. The promise of warmth. They looked so cold you see, those pitiful last minute Christmas shoppers. Cold and horrified by the amount of cash they’d just haemorrhaged on their daughter’s Urban Outfitters blue velvet basque or the North Face Nupste jacket that their son would inevitably get mugged over.

And I bet that neither woman had even started on her Christmas tree. With hubby’s voice ringing in her ear: ”Over my dead body will we hang those cheap bloody baubles again” each woman was doomed to spend 45 minutes of time she didnt have, agonising over whether she could afford a set of this year’s fashion bauble, hand carved from reindeer antlers foraged by real Jutland grannies.

Next came the inevitable steeplechase for brandy butter that mother-in-law simply could not imagine Christmas without; followed by a blood curdling scream as a better organised woman nabbed the last jar in Christendom, with Mariah Carey squawking from the in-store P.A ”All I want for Christmas, is yoooooooo!” in the perverse vibrato that spawned a generation of my-dad’s-got-stage-four-pancreatic-cancer-and-my-winning-is-his-final-wish Britain’s Got Talent hopefuls. Well I’m sorry Mariah but I’ve been forced to listen to your infernal caterwauling for over 25 Christmases now, and I’ve had ENOUGH.

Nor do I want an inflatable Santa suit or a cactus that doubles as a bedside lamp or a string of Justin Beiber fairy lights or a penis shaped gas hob lighter or a pottery Chihuahua with its own growable coat made of sprouted Chia seed or Kylie Jenner’s Ultimate Eyebrow TM or a Greta Thunberg earthenware paperweight with ’Blah Blah Blah’ written on it or any other item that will fill the land well before next Christmas.

Last year my Yuletide misery reached its peak in a shop called Tiger, an emporium of the sort of useless gadgetry that will surely deck the halls of Hell. I timesed the plastic boxes of glut by the sum of Tiger shops worldwide (856) and momentarily lost the will to remain upright. Was there no end to our lust for novelty? And where would the shoe umbrellas end up? Cos they’re amusing for a minute on Christmas Day between the lighting of the Christmas pudding and the Queen’s speech but what self respecting earthling would willingly attach umbrellas to their shoes?

Then I lost my cool and ranted at the other shoppers about unregulated Western capitalism leading to government funded militias leading to tens of thousands of children without parents let alone presents. Then I sat on the floor and cried. Security called and everything. And I didnt stop crying until some sweet bird of youth from the next door Lush comforted me with a free box of bath bombs appropriately entitled Twilight Calm.

Driving home, cheeks aflame with shame, I realised that there was no difference between me and the unicorn women. We were equally desperate. Equally deluded. Driven equally insane by the annual obligation of the giving and receiving of shit we neither want nor need.

Almost every woman I have ever canvassed around a cash register at Christmas shares the same dread. Of overspending, of underspending, of getting it wrong, of the torturous mental comparison of your kids ripping open present after present, to those freezing kids holed up in some God awful migrant processing centre who’d be thrilled with a pair of gloves.

So why do we agree to it – this slavish consumption of stuff– year after year after fatty livered year? Look. I get that Christmas is for children. And Christians. But the compulsory corralling of the wider family? Tell me one family you know of who actually relax in each others company on Christmas Day, when each individual’s idea of what constitutes the perfect Christmas differs to the point of violence. (I’ll never forget my ex boyfriend calling me a see you next Tuesday because I refused to cut a cross into my Brussels sprouts). Is it any wonder then that assault and domestic murders increase by 25 per cent during the festive period?

Let there be no more Christmas, at least not for us parents, trapped for days behind our washing up laden islands, berating ourselves for the stocking fails, the dried out turkey, the unsanctioned visit from the neighbours who talk incessantly throughout the last scene of The Usual Suspects. Let us start a revolution. HERE. TODAY. Let us replace the least wonderful time of the year with FCUK Christmas, Lets Actually Enjoy Ourselves. You can still shower your kids with presents if it makes you happy but you don’t have to follow tradition for traditions sake. God won’t care. I promise. She’s too busy negotiating the end of days to worry about the correct observation of trimmings.

So please. Take my tip.

Don’t drink Eggnog if it makes you hurl, don’t invite your in-laws if they make you cry, and don’t watch Strictly if it makes you wish you’d married Tibor from the foreign office. Instead, invite treasured friends round for charades, dance to Wang Chung like there’s nobody watching (which there won’t be if you dance anything like I do) and, most importantly, eat exactly what you want, all day long, especially if it’s fattening.