Last Saturday my friend invited me to a ’House of Honey’ rave in Shepherds Bush. The theme was pink so I decided to come as Penelope Pitstop.

As we wandered down the Uxbridge Road people gave me funny looks. ”Do I look like a man?” I asked my friend. ”Course not,” she said. ”They just don’t have Penelope Pitstop in Mogadishu.”

Before the party, we went to a swanky bar and quaffed espresso martinis like players. Then we sashayed back up the Uxbridge Road towards the venue feeling sexier than we had for a very long time. As the thump-dee thwang-dee-diddle-dee-zoink of house music got louder, I flashed back to one of the most euphoric moments of my life; dancing on top of a float at the Sydney Mardi Gras, twenty years old and the most beautiful I’d ever be, in a chain mail minidress and killer heels, with thousands of party people cheering me on. 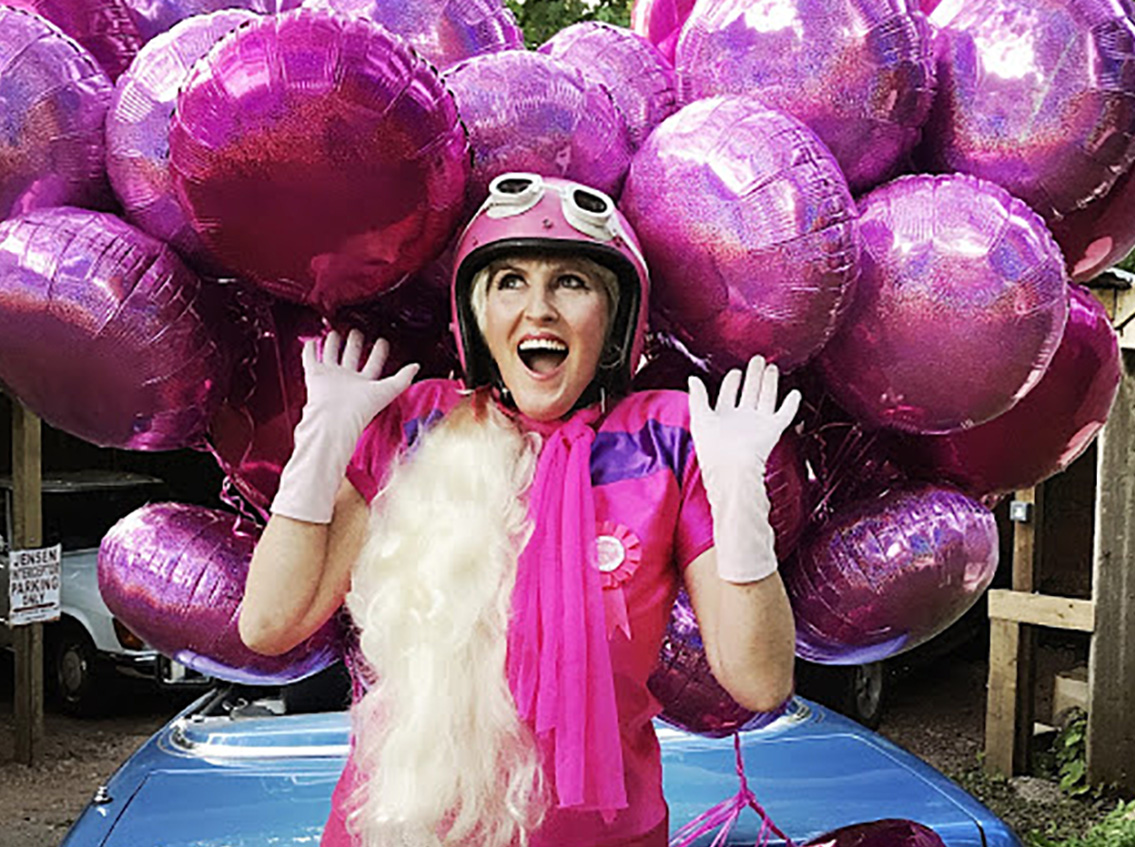 On our arrival, we were greeted by a small bald man in a pink glittery skirt and matching nipple rings. He had the same facial architecture as Nosferatu and his breath was so fetid that I sprung backwards into two women in pink play suits with fluffy pink unicorns horns and long sparkly tails. They looked about 60. Now let me clarify that there is absolutely nothing wrong with looking 60 but not I repeat NOT when you are dressed as My Little Pony. Why no one had the heart to tell them how ridiculous they looked, their crepey flesh, perpetually tanned from too many Ibizan summers, crammed into lycra, I can not fathom.

Not knowing where to look I fled to the ladies loo which was filled with wasted revellers who had been taking drugs for so long that their entire faces had collapsed. Too jaded to bother with discretion, they snorted cocaine right off the sink from a shared plastic straw, their dessicated mouths twittering like demented chaffinches.

After politely refusing a sniff of Amyl Nitrite (Amyl Nitrite!!!) I headed for the dance floor where a throng of gurning Gollums and haggard women in flammable fabrics whooped and whirled. Here Penelope Pitstop was definitely a thing and I was kissed, pawed and photographed from every angle before being dragged towards the stage for optimal viewing. Now if this was 1988 I’d have leaped to the highest platform, pulled my micro dress over my head and jiggled my bottom for all the world to see, but as a 50-year-old housewife and mother of two teenagers, dancing on a podium felt WRONG ON SO MANY LEVELS.

Suddenly wanting out, I elbowed my way through the heaving mass of white middle class ’gravers’ and felt relieved that I am no longer compelled to jiggle my bottom at a crowd of strangers in order to feel loved, but free instead to pass the ’jiggling’ baton to my beautiful teenage daughter. (This is the kind of epiphany that would normally have cost a fortune in therapy fees so at least I was quids in).

As I sat on the stairs wishing I was at home with my husband watching Blue Planet II, things suddenly started to get weird. First, my tongue went numb and then my arms felt like lead and I was convinced that my knuckles were dragging along the floor. ”Oh my God I’m having a stroke,” I said out loud until I remembered popping a tissue pouch of magic mushrooms into my mouth at the beginning of the evening.

People’s facial features began to stretch and shrink and slowly but surely my reality morphed into Hieronymous Bosch’s The Garden of Earthly Delights, the horrors of which have haunted me since my high school art class. I watched the carpet come alive with human ears and broken lutes and white dismembered legs all travelling to some unseen destination. One woman’s nostrils were streaming with ants and there was a man in a big hat with half an eggshell for a body who scuttled up to me enquiring as to whether I’d like to do ’a cheeky half’ with him.

Desperate to flee this nightmare, I ran to the back of the room and perched on a little pink stool. Wanting nothing more to do with Penelope Pitstop, I pulled off her helmet, goggles, wig, scarf, gloves, belt, and boots. Now I was just a 50-year-old woman in teenage clothing with blonde highlights and far too much makeup, whimpering ’heeeeeelp.’

Thankfully a man with kind eyes came to the rescue. He took my hand and led me outside but I baulked at the packed balcony. ”No more gargoyles, please” I begged. ”Don’t look at them” he said ”look at your feet” so I did, but they were four foot long! My friend tried to make me laugh by doing mad dancing. This worked for a bit but then things got dark again. ”Oh God” I moaned. ”I can hear my daughter’s voice telling me how embarrassing this whole scene is. I feel old and tragic and I don’t want to be with these deluded people all desperate to be young again” The kind man agreed but my friend wasn’t having it. ”Oh for God’s sake Rosie, you’re just tripping! See it for what it is and laugh” but there was no laughter to be had. Only my daughter’s voice begging me to grow up and be normal.

What seemed like a geological era passed before my friend finally agreed it was time to leave. As we stepped onto the Uxbridge Road I was elated to be back in multicultural Britain. Me and my friend and the kind man strolled arm in arm to Woody’s Grill, a middle eastern restaurant populated by real people acting their age. Our Armenian waitress did not approve of my request for fennel tea so I had Fanta instead. By now everything was incredibly funny and we laughed until our sides ached. Then we went home.

Later in my friend’s sofa bed, I thanked God for my not particularly exciting but grown-up husband and my relatively conservative teenage kids and our mediocre house in the country with its difficult, sloping garden. When I consider the alternative – living with addiction, bad hair and an unpublished Peter Pan called Nigel – I am the luckiest woman in Christendom.